Postfix Postfix is a free and open-source mail transfer agent (MTA) that routes and delivers electronic mail. It is intended as a fast, easier-to-administer, and secure alternative to the widely-used Sendmail MTA. Postfix is released under the IBM Public License 1.0 which is a free software licence. It was originally written in 1997 by Wietse Venema at the IBM Thomas […] 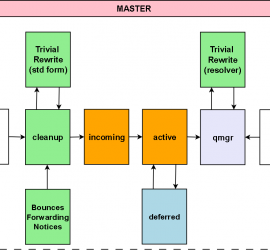